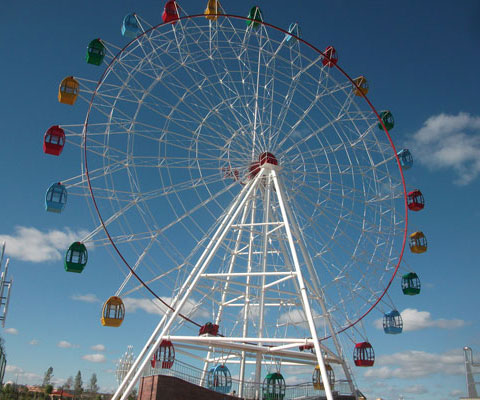 The ferris wheel is a large wheel-shaped mechanical building facility. Hanging on the edge of the wheel is a passenger cabin (Gondola). Passengers sit on the Ferris wheel and turn up slowly, they can overlook the surroundings from a height. The most common occasions where the Ferris Wheel exists are amusement parks (or theme parks) and garden games. As a kind of playground mobile game, they are collectively called “Three Treasures of Paradise” with roller coasters and carousels. But the Ferris wheel often exists alone on other occasions, and is usually used as an active viewing platform.

Get a Free Quote

The main structure of the ring-shaped ferris wheel is a combined steel box girder structure, which is supported by a steel pipe truss on the inside and a closed game cabin on the outside of the box girder.

The ferris wheel’s rim is closely attached to the outer frame, and the drive wheel is used to rotate the rim to make the sightseeing cabin rotate along the wheel’s frame. Passengers ride on the basement uniformly. The speed of the sightseeing warehouse is relatively slow, with an average speed of 0.2 m / s. At present, the types of structures that have been completed in China include the “Ring of Life” in Fushun City, Liaoning Province, and the landscape tower of the Changzhou Bauhinia Park.

The ferris wheel is a large wheel-shaped mechanical building facility. Hanging on the edge of the wheel is a cockpit for passengers. Passengers sit on the Ferris wheel and slowly turn upwards, overlooking the surrounding scenery from a height, usually used as an active viewing platform.

Even if you are operating an amusement park which has a lots of attractions which including ferris wheel rides, but do you know how does a ferris wheel work? Here Beston will show you more about this:

As the giant ferris wheel in China with a height of 160 meter, Nanchang star is located in Jiangxi, China. It owns 60 cabins, and each cabins could hold 6-8 people. These 60 cabins represent the time-scale. Each of the ferris wheel cabin is equipped with LCD TV, fire extinguisher, interphone and other life-saving equipment. It is the world’s tallest ferris wheel which was built in 2006.

It is the largest water ferris wheel in the world with a height of 120 meter which is located in Suzhou, China.

This ferris wheel is the largest grand river-crossing ferris wheel with a diameter of 110 meter in Tianjin. It owns 48 transparent cabins. Each of the cabin could hold 8 people. It’s run time is 30 min.

Get a FREE quote now from Beston:

Henan Beston Amusement Equipment Co.,Ltd. is a large-scale amusement, kids and giant ferris wheel rides manufacturer in the city of Zhengzhou,China. We are also the professional manufacturer in kiddie rides developing, designing and producing. We have lots of excellent designer and professional technician. The ferris wheel rides we produced has got great praises from the clients around our whole countries.

Contact Us
Get a FREE quote now from Beston: